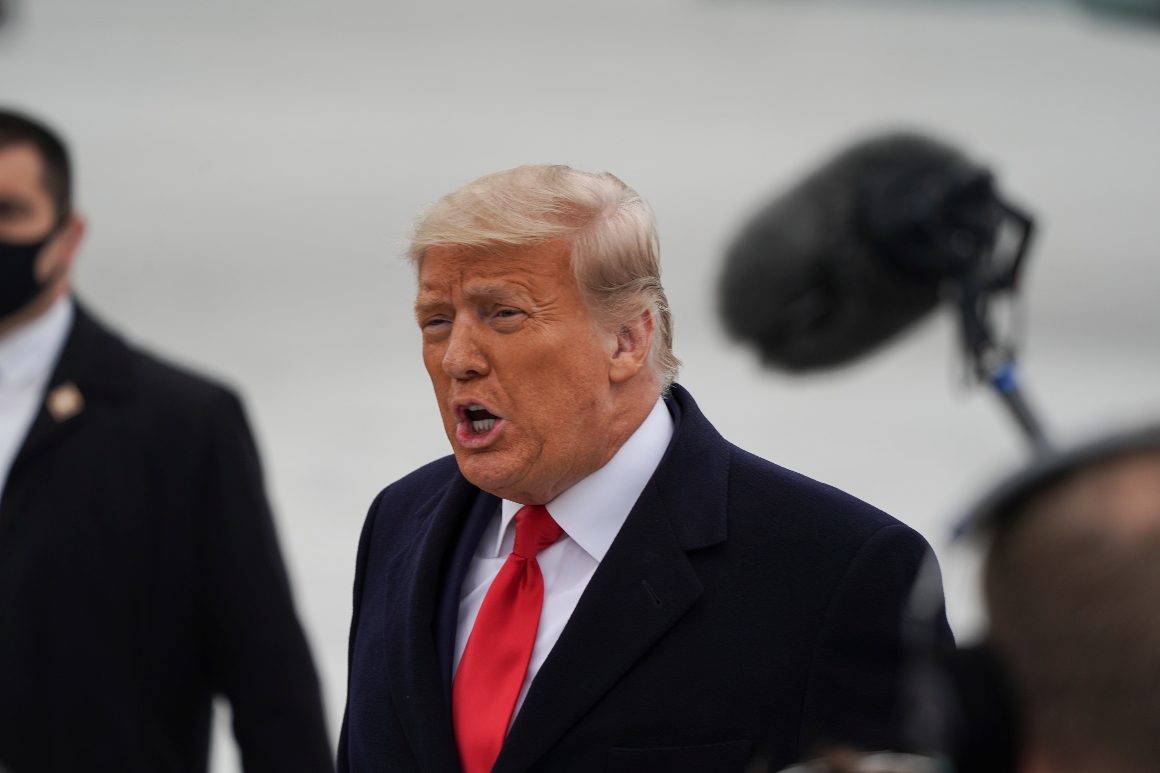 At the same time, there are signs that Trump’s influence is waning after the deadly riot at the Capitol. And in the absence of a standard-bearer in the post-Trump era, the impeachment vote suggested the emergence of a small opening for alternative positioning.

Here are four lessons learned about the GOP from The Republicans who voted to impeach the president:

There are four House Republicans representing deep red districts who had little to gain politically from their decision to impeach and appear to have cast their vote out of deep unease with the events of Jan. 6.

But of all the House Republicans, Rep. Liz Cheney (R-Wyo.) may have risked more than any other by bucking her party’s majority and casting a perilous vote from an at-large district that gave Trump 70 percent of its vote.

Upon word of her intended vote, Rep. Jim Jordan, who received the Presidential Medal of Freedom from Trump earlier this month, called for Cheney’s removal from her role as House Republican Conference Chair. It’s hard to imagine the praise that Cheney won from House Speaker Nancy Pelosi — “Good for her for honoring her oath of office,” Pelosi said — playing well either in her conference or back home.

In the end, more Republicans may choose to rebuke Cheney than to impeach Trump.

But Cheney, the daughter of a former vice president who also served in the House, appeared to have had enough with the president, releasing a blistering statement that saddled Trump with the sole blame for the events of Jan. 6.

“There has never been a greater betrayal by a President of the United States,” she wrote, in a statement that was excerpted by other members on the floor.

She framed her stance as “a vote of conscience.”

For at least some of the Republicans who joined Cheney, the calculation may have been just that. While Reps. David Valadao of California and John Katko of New York represent districts that went for Joe Biden, the other eight representatives who voted to impeach will now have to answer to pro-Trump constituencies at home.

Three of them, Reps. Tom Rice (R-S.C.), Dan Newhouse (R-Wash.) and Anthony Gonzalez (R-Ohio), represent districts that Trump won by double-digits. None of the trio have been particularly strong dissenters of the president in the past — in fact, Rice voted to object to the certification of Biden’s election last week.

Stewards of the brand

In 2019, not a single Republican House member supported Trump’s impeachment. Just more than a year later though, the vote laid bare an effort from stewards of a more traditional brand of conservatism — that of Ronald Reagan and George W. Bush — to wrench the party back from Trump.

Of the 10 Republicans who supported impeachment, at least four could be defined as shepherds of the GOP’s former brand. Rep. Adam Kinzinger, a 42-year-old Republican with a potential future in statewide politics in Illinois, has been an outspoken critic of Trump’s baseless claims of voter fraud, despite the potential ramifications in a district that went for Trump over Biden by 16 percentage points.

Meanwhile, Rep. Peter Meijer (R-Mich.), an Army veteran who replaced Trump-critic-turned-Libertarian, Justin Amash, campaigned on a desire to bring political discourse back to a more dignified era. In a statement announcing his vote to impeach, he echoed that language.

“It weighs on me that Gerald Ford held this seat for 25 years before he was elevated to the Presidency,” he said. “President Ford’s pardon of Richard Nixon was a necessary step to move the nation past the wounds of Watergate, but it followed Nixon’s resignation and acceptance of responsibility. Since last week, the President has accepted no responsibility for the violence his rhetoric and actions inspired.”

Until the election of GOP Rep. Michelle Steel (R-Calif.), Rep. Jaime Herrera Beutler (R-Wash.) was the last Republican representing a district touching the Pacific Coast. It is a role she took seriously.

“I am a Republican voter,” she said in a statement. “I believe in our Constitution, individual liberty, free markets, charity, life, justice, peace and this exceptional country. I see that my own party will be best served when those among us choose truth.”

Trump barely cleared 50 percent in her district November. But Herrera Beutler’s vote and that of her Washington colleague, Newhouse, may have to some degree reflected the unique calculus of top-two primary politics in the state, which can be more protective for a Republican incumbent than a straight party primary.

Newhouse, a co-chair of Trump’s 2020 campaign in Washington, comes from a solidly Republican district, where Trump carried nearly 58 percent of the vote. But he faced criticism in the state for joining Texas’ ill-fated lawsuit to undo the results of the election. And like every other pro-impeachment Republican except for Rice, Newhouse did not object to certification of the Electoral College votes.

On the House floor on Wednesday, Newhouse said there was “no excuse” for Trump’s actions amid the riot at the Capitol. “Last week, there was a domestic threat at the door of the Capitol, and he did nothing to stop it.”

About half of the Republicans backing impeachment have sound political reasons: Katko, Herrera Beutler, Valadao, Upton and Meijer.

The most vulnerable ones are Katko and Valadao, who both hold districts that voted for President Obama in 2012, Hillary Clinton in 2016 and then Joe Biden in 2020. Katko, in particular, owes his survival to Democratic recruitment failures as much as his own political prowess. He has twice been able to position himself as a centrist alternative to a progressive challenger who supports Medicare-for-all.

Only Katko, Meijer and Valadao won with less than 55 percent of the vote last November.

But Herrera Beutler and Upton have also seen their districts become more competitive since 2016. All have large suburban components and were targeted by Democrats in 2018 and 2020.

Nearly all of these members will be affected by the 2021 redistricting. Michigan and California are likely to lose a seat each and the process is in the hands of a non-partisan commission that may not prioritize incumbent protection. New York is on track to lose two congressional seats and Democrats are in charge of the redistricting, leaving Katko in great peril.

It’s hard to discern the political risk appended to their votes when they will be running in entirely new districts.

The freshmen fear — or revere — Trump

Notably missing from the pro-impeachment crew were most of the dozen of Republican members who flipped Democratic-held seats in 2020 — and the horde of safe-seat members who took office during Trump’s first term.

Few members elected since 2016 in conservative-oriented seats backed impeachment — that’s a group that’s all-too-familiar with the first-hand grip Trump has over the grassroots. In fact many won primaries by running as Trump acolytes, like Reps. Ronny Jackson (R-Texas), his former White House doctor; Marjorie Taylor Greene (R-Ga.), who build a vast social media following on the MAGA internet; and Barry Moore (R-Ala.), who claims to be the first elected official in the country to endorse Trump.

They made clear they stand behind the president — no matter what.

“Since 2016 there has been hashtags going around in our nation that said, ‘Not our president. Resist. Resist,’” Moore said Wednesday in what he described as his first floor speech. “Members across the aisle have said things in public to have supporters of this president attacked and demeaned.”

In swing district seats, the devotion to Trump is more measured. Republicans worked hard to recruit a diverse crop of candidates that could help carry the party out of the Trump era and rebuild its once-storied brand in suburbia. These newcomers were single moms, first-generation Americans, state legislators who espoused the values of the GOP without Trump’s abrasive tone.

Rising stars like Reps. Ashley Hinson (R-Iowa) and Nancy Mace (R-S.C.), quickly signed onto a letter urging their colleagues not to object to the certification of electors. But they declined to back impeachment, calling it divisive.

And a crop of moderates, led by Rep. Brian Fitzpatrick (R-Pa.), backed a resolution to censure Trump. An impeachment, Fitzpatrick said in a statement, would force “a time-consuming and divisive trial in the Senate” that would “undermine” Biden’s “ability to govern effectively.” Joining him were battleground GOP Reps. Young Kim (R-Calif.), Meijer, Upton and Reps. Tom Reed (R-N.Y.) and John Curtis (R-Utah).

The most notable signer was Kim, a freshman who is one of the first Korean-Americans in Congress. She won a district that Trump lost by a whopping 10-point margin.

“I believe censuring the president is a better option,” Kim said in a statement. “This would be a strong rebuke of his actions and rhetoric and unite our country and chamber, rather than divide it.”

Sign up today to receive the #1-rated newsletter in politics

Greetings from Sunshine Products USA! So, did Frank awake one morning with the idea to start machining gadgets and sell