Disha Patani and Varun Dhawan recently came together to shoot for an upcoming project and they had fans rooting for an on-screen pair up and we couldn’t agree more! Disha posted pictures of her and Varun looking lost in each other’s eyes as they posed for a shoot.

Parineeti Chopra took to her Twitter to spread awareness about Novel Coronavirus by uploading a series of photos of herself donning a mask at the airport. She captioned the post, “Sad, but I guess this is the situation now. Stay safe guys.” In the pictures, she can be seen posing a casual attire and carrying a stylish olive-and-beige designer bag across her shoulder.

However, the actress’ post wasn’t well-received by the social media users, who slammed her for allegedly ‘spreading fear’ besides being opportunistic and turning it into a “fashion photoshoot”.

Akshay Kumar and Katrina Kaif will be sharing the screen space after a long time and fans are already excited for it. They will feature in Rohit Shetty’s cop drama ‘Sooryavanshi’ which is slated to hit the theatres in March. Now a leaked video where Akki and Katrina can be seen on a bike. A fan club of Akshay has shared the video on social media and it is totally unmissable! Check out the video below:

Kartik Aaryan is currently busy promoting her upcoming romantic drama ‘Love Aaj Kal’. And today, a video of him gatecrashing a wedding in Delhi has surfaced. Dressed in a white tee, Kartik can be seen waving at his fans while he gatecrashes a wedding. Watch the video here:

Ace filmmaker Vidhu Vinod Chopra’s ‘Shikara: The Untold Story Of Kashmiri Pandits’ which released last week, explores a love story that revolves the event of the mass exodus of the Kashmiri Pandits from the beautiful valley. Chopra, who hosted a special screening for all his friends and family last week, saw veteran politician LK Advani also attending it. In An Exclusive Interview with ETimes, Vidhu Vinod Chopra opened up about his bond with the veteran politician. He said, “Mr LK Advani is very very special to me and I want to say that. When I was a student, he was the first one to give me Rs 5000. The first Rs 5000 I earned in my life was given to me by Mr LK Advani for the National Award. When I went on stage and they gave me the National Award and it was encashable after 8 years as it was a postal certificate. Then I made a lot of noise which I don’t want to go into but he was the I&B minister and he called me the next day to his office and gave me breakfast. Then he sent me to Gol Dak Khana in Delhi and I actually got my first Rs 5000 from him and that I will never ever forget.”

Furthermore, he added, “When I got nominated for an Oscar I had no money, I had nothing and I read in the paper that I was nominated. He gave me an Air India ticket and $ 20 a day and that I owe it to Mr LK Advani. I want the world to know why he is so special to me. Not because he is a politician but because he is the man who sent me to Oscars.”

Kareena Kapoor Khan and Kartik Aaryan recently walked together at the ramp. And today, we got stumbled upon a selfie of Bebo, Kartik Aaryan, Manish Malhotra and Sophie Choudry from the event and we can’t get enough of it. Kareena looked like an ultimate sass queen in a stunning lehenga choli. 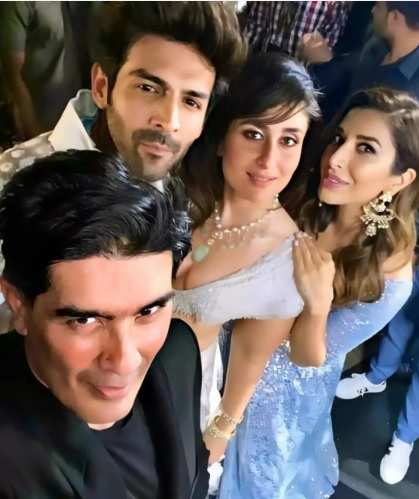 The first trailer of ‘Thappad’ which released a few days back saw a good response from celebrities as well as the audience, who hailed the talented actress for her fearless character. In the one minute sixteen seconds new trailer, Taapsee is requesting the audience to ban her own film’s trailer by reporting it. Watch the trailer here:

The art of surfing is often dependent on the elements. Those who wish to take up the sport are subject